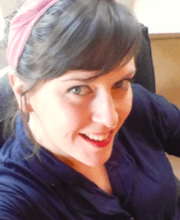 Alina is a PhD student in the department of Theatre Studies and the Honors Program for PhD students in the Faculty of Humanities at The Hebrew University of Jerusalem. She received her B.A and M.A. degrees from the department of Theatre Studies, both with honors. Since 2009, Ms. Meltzer has taught various courses, such as: Play and Performance Analysis of Middle-Ages and Renaissance Drama (2009-2015), Shakespeare's Selected Plays (as guest-lecturer at the English Department, 2014) and Play and Performance Analysis of Greek and Roman Drama (2013). Ms. Meltzer teaches History of Theatre at the Nissan Nativ Acting Studio in Jerusalem (2009-today).

What teaching at the department of Theatre Studies means to me: Teaching and studying at the Theatre Studies department is a journey that allows us to explore a wide range of human experiences (Political, Sociological, Psychological, Cultural, Historical and Aesthetic) through their expressions in that medium, the theatre, which is a fascinating combination of all arts.