Chair of the Department of Theater Studies 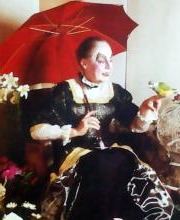 Francoise Coriat is a set, costume, and mask designer, and a free-lance artist. She grew up in London and Paris, studied History of Art and Literature at the Sorbonne University and trained in drawing, sculpting and singing. She has lived in Israel since 1967 and in Jerusalem since 1969.

She has collaborated on numerous productions with the Jerusalem Khan Theater, the Rubin Academy, the Nissan Nativ Studio, the Hebrew University, the Jerusalem Opera, with small “fringe” groups, solo artists and secondary schools. Ms Coriat has taught at the Theatre Studies department of the Hebrew University since 1999, has given workshops at Oranim College, at Tel-Aviv University, at the Hartsfeld Hospital (Art Therapy department), and elsewhere.

Personal Statement: Theatre includes so many arts apart from acting and literature! It is a joy and an honor for me to share with the students of the department what makes the magic of the stage, like set design, costumes, masks and puppets: arts and crafts I dedicated most of my professional life to and which are still as thrilling to me as ever.